Located in the town of La Paz, in Baja California Sur, the Aura Solar III plant has a generation capacity of 32 MW and includes a lithium-ion battery storage system with a capacity of 10.5 MW/7.0 MWh.
May 2, 2019 Pilar Sánchez Molina 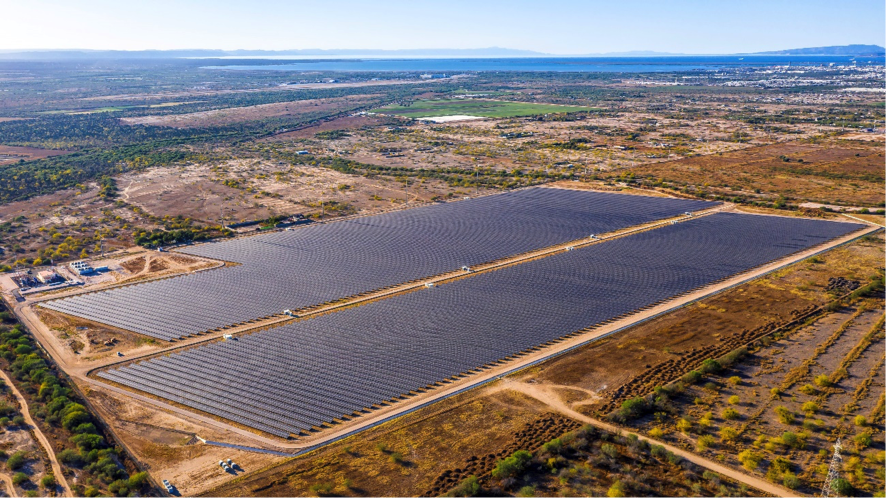 Located in the western part of northern Mexico that benefits from one of the nation’s highest irradiation rates, Aura Solar III is near the town of La Paz, in Baja California Sur and benefits from a sunlight level of 5.8 kWh/m²/day.

The 50-hectare project incorporates 94,080 panels, each generating 340 Wp of power. With a generation capacity of 32 MW, the site produces enough electricity to supply half of La Paz’ residential users, according to Elmya.

The new facility is Latin America’s first large scale solar power project to be combined with a lithium-ion battery system. The storage aspect of the $45 million project has a 10.5 MW/7 MWh capacity and string inverters.

Aura Solar III has a generation permit granted by Mexico’s Energy Regulatory Commission under a distributed generation regime. The energy produced by the plant – an estimated 65 GWh per year – is being sold exclusively to the Federal Electricity Commission (CFE) through a 20-year power purchase agreement. The CFE pays for the energy according to the local marginal price of power in La Paz.

Aura Solar III, which is owned by Mexican investment group Corporación Aura Solar, interconnects with the Olas Altas substation through a new 1km, 115 kV transmission line, and has been supplying power to the CFE since October.

More than 250 workers took part in the plant’s construction with almost all of them recruited locally.